Lovetastic (now a part of OKCupid) was one of the first social networks to be built with Ruby on Rails, launched early in 2006. Not only does the site address an important social mission, but we also broke a number of technical barriers in building the site.

Some of the unusual problems we solved in building Lovetastic:

RubyRags is actually a project built for members of the Ruby community. It’s also a fully-automated e-commerce site, shipping items across the globe every day with almost no intervention by the site’s owners on a day-to-day basis. 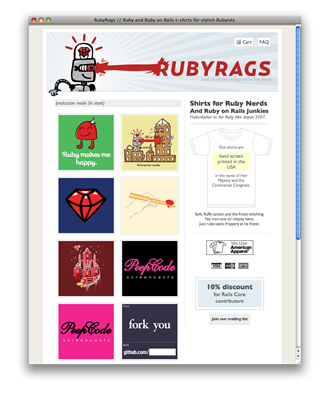 To accomplish this, we had to build a special Ruby library for integrating with an outsourced fulfillment warehouse, which happened to have some of the most antiquated IT systems we’d ever seen (including a nightly push via FTP of CSV files to communicate new orders!) The robust Ruby library we built for this purpose is used by others, including our friends over at Ravelry.com.

Some other features of the project:

Harvard University's Humanist Chaplain asked us to build them a "Slate Magazine for Humanism," and we were happy to oblige. 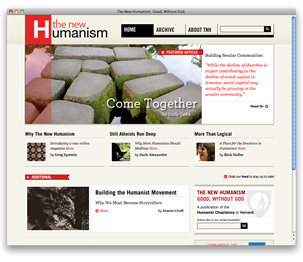 Some features of our work on this project:

Yale University’s Center for Media Instruction and Innovation needed an easy way to turn videos and PowerPoint slides of lectures into syncrhonized presentations that could be viewed in any web browser. We used Adobe Air to build cross-platform desktop software that makes it possible rapidly to assemble Flash presentations that present video, slides, and subtitles in sync against an infinite variety of designs, layouts, and backgrounds. Our application turned what would have been an extremely tedious task in Flash into a simple five-minute job.

We partnered with tech publisher IDG and Alternative Productions to build a fully-cached high-traffic microsite for computer chip manufacturer AMD.

Sequoyah is the leading wholesaler of conflict-free diamonds and green gold in Denmark. We have been helping them take their entire business online (from invoicing to sales metrics). To do this, we built a system that manages multiple languages, currencies, and a wide array of complicated pricing formulas that depend on daily fluctuations in the precious metals markets.

We helped HealthTalker build online communities for people who suffer from specific medical conditions, enabling those patients to share information, tips, and empathy.